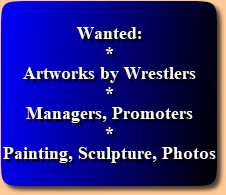 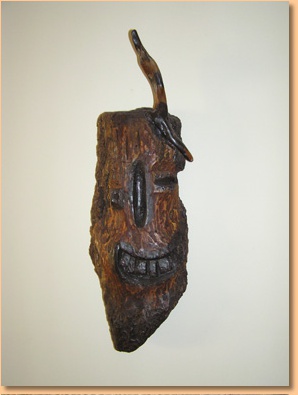 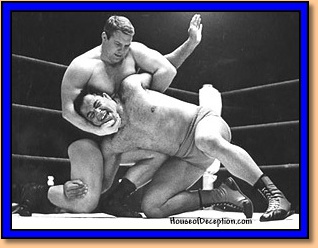 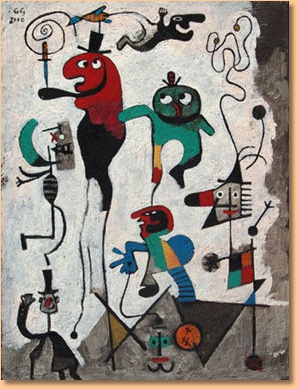 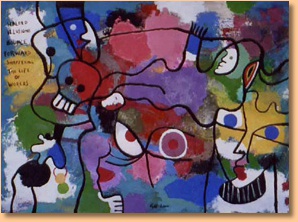 Gordienko in ring action--at work in another medium and on another canvas--where "anything can happen."

"Carnival, Anything Can Happen"
Winchester Galleries, Victoria, BC

"Face Carved in Bark"
Courtesy Dan Grieve Collection
Note from Mr. Grieve:
Kind of a strange story for you: I used to work at the Home Hardware in Courtenay B.C., and George was a regular customer there. I used to give him free wood a lot of times and one day he came in and gave me one of his pieces...a face, carved in bark. I didn't know anything about his history at all until now, other than the fact that he painted. It's too bad he passed away; I didn't know until I saw this site. I have had the face hanging on my wall ever since he gave it to me, even though it's not to everyone's taste. 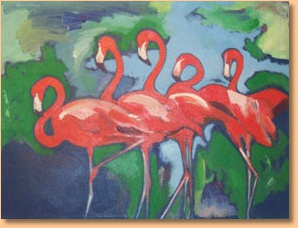 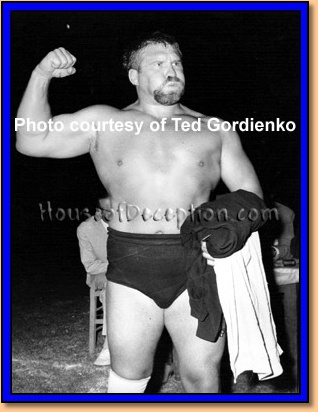 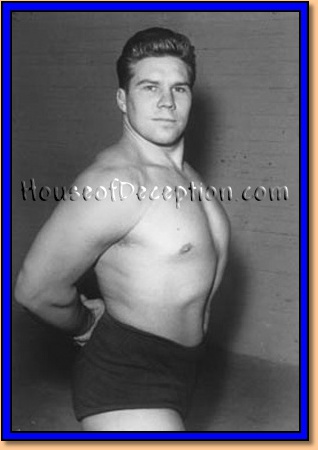 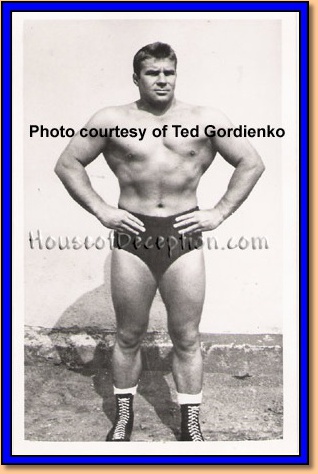 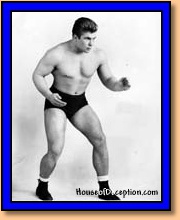 In 1928 I was born in the city of Winnipeg. I had two older brothers. Sports was a popular pastime and since we were located on the edge of town and almost in the openness of the prairies, there was a lot of space for playing fields. I was big and sturdy for my age. In high school I was one of the star players on the gridiron.

I must have been about 15 years old when I got into wrestling. Albert Olsen, who was five or six years older, was responsible. Albert was a very good,
all-round athlete excelling in just about everything. He was the first to get the idea of wrestling. He asked me if I would train with him.

I had been training with weights for a couple of years. Our equipment was homemade and crude compared to the competition sets, but that may have been advantageous since were principally concerned with feats of strength, more than body building.

Albert joined the R.C.A.F., i.e., the Canadian Air Force, and became a P.T.I. That meant that we could only train together when he was in town on leave. But I continued and found other guys to train with on the mat.

After the war the local club at the Y.M.C.A. expanded when the young men were released from service.

Albert was one of the top guys and was the national lightheavyweight champ
at one time. There were some others who were pretty good, such as Gordon Nelson, Harold Nelson (no relation), Jake Costello, Steve (The Little Giant) Kozak, and I should not forget Jimmy Trifunow, who was very accomplished and
became the coach of the Canadian Olympic team and later was awarded the Order of Canada for his contribution to Canadian culture.

One night when I was training at the "Y" Wally Karbo and Joe Pazandak made a visit. Joe worked out with me and didn't take me off my feet for six
minutes, when Wally called out that Joe should conserve his energy for his coming bout. Not bad for an 18-year-old. I was very strong but lacked knowledge.

I think Joe and Wally spoke to Tony Stecher. One day I received a letter from the office asking if I was interesting in going to Minneapolis. I think Joe decided that I would make a good training mate. Well, I accepted and
made the journey.

I stayed with Joe and we worked out daily unless he made a long trip somewhere. Joe had more confidence when he was at home and he could handle me at first. However, after about a year I could hold my own even for an
hour or more.

We also trained a bit with weights and played handball. I guess you could say we were in great shape. I had never played handball before. Joe was a good player. Sometime later I took up squash and since there is a similarity, I picked it up fairly quickly. Also, I played with experienced players, which was a help.

It was not too long before I broke in as a "pro." One of my starting matches was with Iron Mike Burnell. Mike was one of the guys I liked and he helped
me. I think he could claim to be a former A.A.U. heavyweight champion. He got out of the business a short time later. I think he saved his money and bought some earth-moving equipment. I hope he made out okay.

I went to San Francisco, then back to Minneapolis, then on to Buffalo, N.Y., for Ed Don George.

I was 18 years old when I broke into the business and I was now 19. I was growing tired of traveling as it did not leave much time for anything else.

When I was in Winnipeg I attended art school and was able to take some lessons in San Francisco as well. I guess I had the "itch."

While I was young and had a lifetime ahead of me, I decided to make a break.

In hindsight, I did the right thing because now I am doing "my thing" which to me is so satisfying and interesting. It is life itself.

I think some people were critical of my departure and rumors flew.

I went back to Canada where the art scene was very quiet, at least in western Canada. I worked at odd jobs which I now consider useful since the experiences come together in later life. For me, anyway.

One day in 1953 Stu Hart called me from Calgary and asked if I was interested in working again.
Okay. So off I went to Calgary. It worked out alright, though there were long distances between towns. Later in the year I went to Australia. On the return journey, instead of flying back to North
America, I exchanged my ticket for passage on an ocean liner to Europe. Can't think of why I did that, and it wasn't a dumb idea.
Departed from Sydney and disembarked in Naples, Italy.

From there, I took a train to Rome, Florence, and Paris. I spent a few weeks in Paris - and loved it. From there I went to London. I stopped there a fair
length of time - 'til my money ran out. I attended St. Martin's School of Art and had Anthony Caro as an instructor in sculpture. Caro became internationally famous and was knighted for his work.

When the time came I took an ocean liner again to Quebec City on the St. Lawrence River.

I made some money again working for Stu Hart. Through some friends, I heard from Joint Promotions in England. They were willing to pay my fare and
guarantee my purse money.

I had fallen in love with Europe and going back there gave me a feeling of being "at home." A great place for an aspiring artist.

I settled into London and it became my headquarters for a number of years. There was a lot to take in. Cultural life on a very high level. I got to other parts of Europe often: France, Germany, Belgium, Spain, Holland,
Austria, Greece, etc.

I should mention Paris in particular. There were a couple of boys there who were into painting and had personal showings. They knew Picasso, since he watched wrestling on television and was said to be an avid fan. He would not be disturbed when the bouts were on.

Eventually, and to my very good fortune, while I was in the company of the lads who painted we encountered Picasso, and had coffee together. What a polite, well-mannered person. He even insisted on paying. This was truly a high spot in my life.

I also wrestled in other spots around the globe: India, the Middle East, a lot of places in Africa, Japan, New Zealand, the Caribbean, etc.

In 1975 I got back to serious painting and moved to Italy - which was very good to me. I said goodbye to wrestling this time for good. Life had moved on, and I was no longer a young man. Europe was very good to me, very rich in cultural experiences that could perhaps be described as unparalleled.

Now I am back in Canada, on Vancouver Island. I have a quiet location and am trying to put all my experiences together, hoping it will mean something.

Here you will find photos of Golden Age
wrestler and artist George Gordienko, a
gallery of his paintings, a brief autobiography, and several quality links to other resources.

See our other wrestler artist galleries:

Many thanks to Ted Gordienko for sending the two photos below of his uncle, George Gordienko.

An interesting and informative article about Gordienko's art, personal life and wrestling career: "Artist Wrestled with Abstract" by Robert Amos in Times-Colonist (Victoria), March 9, 2006. Amos does not exaggerate when he states, "The life of George Gordienko is material for a novelist."


A longer and more in-depth profile is Brian Grison's "George Gordienko: An Introduction to the Man and his Art."

"Flamingos" is an earlier work of George Gordienko's, probably from the mid-1970s according to his nephew Ted Gordienko, who is currently working on a documentary about his uncle's fascinating life. Note the contrast in styles between this piece and his others displayed on this page.
Courtesy Barbara Turpin Collection